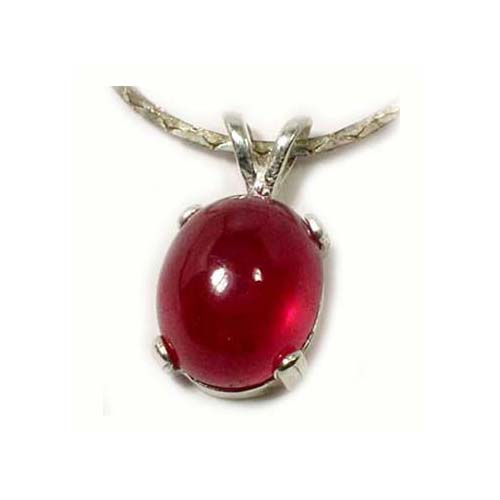 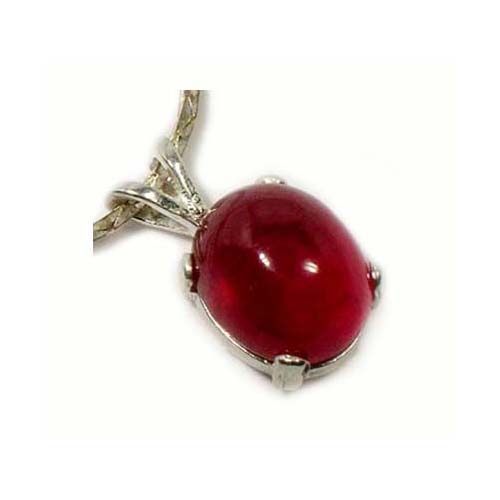 In Sankskrit, an ancient language of India (source of much of the ancient world's ruby), ruby was called "ratnaraj", which means "King of Gems". Rubies were sorted into upper class, middle class, and lower class stones in relation to their color, flawlessness and beauty. Much like Indian society today, no inferior ruby was allowed contact with an upper class ruby because it was believed the low-caste ruby would contaminate the better one, thereby diminishing its magical powers. Ruby was sometimes worn beneath the skin by warriors as a protective talisman with the belief that the ruby would give them courage and make them invulnerable. In the ancient classical world, rubies from Afghanistan, Ceylon were traded in the ancient port cities of the Eastern Mediterranean (often by Phoenicians), and from there traveled throughout Europe.

Celebrating this cultural legacy here's a remarkable and beautiful antique ruby precious gemstone. The gemstone was hand shaped and polished by an 18th century Russian artisan, part of an heritage renown for the production of the elaborate gemstones and jewelry of the Czars of Medieval, Renaissance, and Victorian Russia. As you can see for yourself, the ruby is of stunning quality, transparent, a beautiful, regal red hue. Of course most ruby gemstones are anywhere from lightly to heavily blemished, typically with colorless crystalline material, sometimes with black carbon specks. The colorless crystalline blemishes are almost a hallmark characteristic of natural ruby, and take the form of either seams of colorless crustalline material, or in the form of microscopic colorless crystals, which while not individually discernible, do nonetheless in sufficient density create a "haziness" within the gemstone, causing the character to shift from that of being transparent, to that of being translucent, or even opaque. 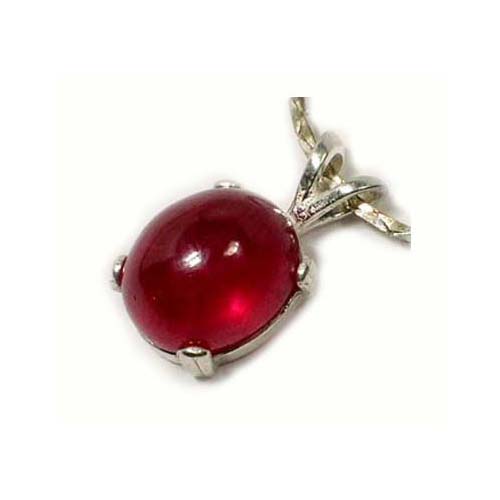 Unfortunately most completely transparent rubies you see offered today at retail are synthetic. While this particular specimen might not be with flaw, toe the eye it is seemingly without blemish, quite clean and without any dark inclusions or flaws which are noticeable with casual scrutiny. Of course at magnification (as in the accompanying photo enlargements) it is seen to possess a few very faint blemishes composed of the colorless crystalline material so characteristic of natural ruby. However none of these colorless crystalline blemishes are easily discerned by the naked eye, and even in these photo enlargements, they are not easy to discern. To the cursory inspection of the casual admirer, the gemstone is simply of gorgeous red ruby which is seemingly without flaw. And the gemstone does possess the much sought after bright blood red color which has captivated mankind for eons.

The ruby is definitely toward the higher end of the quality spectrum. The setting is of contemporary origin. It is a high quality setting manufactured by one of the USA’s leading semi-custom mount producers. It is constructed of solid sterling silver, and can be reset into 14kt gold if requested, and there are also many other setting styles available upon request. If you would like to see them, email us and we will reply with pictures of other available setting styles. The default chain is silver electroplated 24 inch. However we do have solid sterling silver (as well as 14kt gold and gold fill) chains available in lengths between 16 and 24 inches available upon request. We also have available high quality (solid, not formed) handcrafted genuine Greek leather cord with either sterling silver or bronze/brass fasteners. 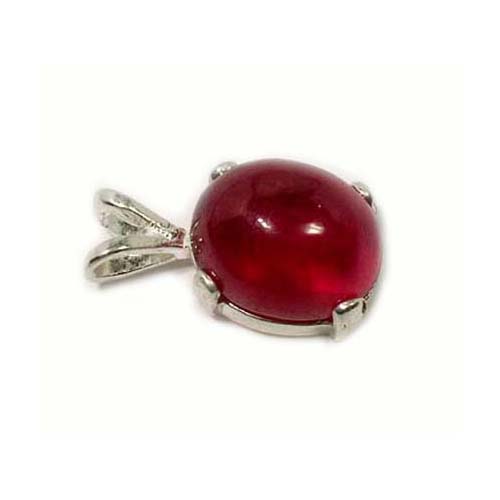 As might be expected under magnification the gemstone shows the unmistakable, hallmark characteristics of having been hand crafted. The coarseness of the 18th century finish is considered desirable to most gemstone aficionados, and is not considered a detriment, or detract from the value of a gemstone. These characteristics are not only expected of hand-finished gemstones, many believe that such antique hand-crafted gemstones possess much greater character and appeal than today's mass-produced, machined gemstones. Unlike today’s computer controlled machine produced gemstones that approach flawlessness in a perfect finish, the cut and finish of an antique, handcrafted gemstone such as this is the legacy of an artisan who lived two centuries ago.

Handcrafted though it may be the gemstone possesses great luster and character, but it is not absolutely flawless. True, the blemishes it possesses are virtually invisible to the naked eye, and to use trade jargon the gemstone can be characterized as "eye clean". However in the accompanying photo enlargements you may be able to pick out a few slight blemishes composed of the colorless crystalline material so characteristic of natural ruby, barely discernible even at magnification. Of course much the same may said about almost any antique gemstone of natural origin, and in particular with regard to natural ruby. An absolutely flawless gemstone simply is not the rule in nature. Most absolutely flawless gemstones will upon close examination be revealed to be synthetic. You might also notice under magnification occasional irregularities in the cut and finish. Naturally these characteristics are not only expected of hand-finished gemstones, you must also consider that two centuries ago the mining techniques even possible then, let alone in practice, did not allow the ultra deep mining operations which are so commonplace today. 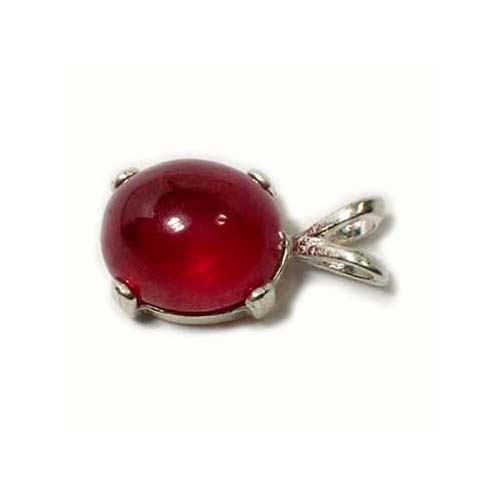 Keep in mind two centuries ago mankind was more or less limited to surface deposits or near surface deposits of gemstones. Higher quality gemstones which today are routinely mined from beneath hundreds of meters, even kilometers beneath the earth's surface, were simply inaccessible then. It is precisely for these reasons antique gemstone must be appreciated as antiques first, gemstones second. The relatively superlative quality of contemporary gemstones mined from deep beneath the earth's surface were simply not accessible two centuries ago, or at least, only rarely so. However for most, the unique nature and character of these antique gemstones more than makes up for the blemishes found within the gemstones, as well as the cutting and finishing irregularities common to handcrafted gemstones, all of which are by and large are only visible under magnification.

RUBY HISTORY: The name ruby comes from the Latin "rubeus" (red). In the ancient world ruby was believed to possess magical powers, and was worn as a talisman for protection from plagues, poison, sorrow, and evil spirits. The ruby symbolized freedom, charity, dignity and divine power, and was associated with fire and blood, implying warmth and life for mankind. Some ancient cultures believed that rubies, as well as other gemstones, grew on trees, just like fruit. The rubies would begin budding as small white gems, and would slowly grow and ripen, turning red in the light of the sun. When the ruby was saturated with red color, it was ready to be plucked. In the classical world, rubies from Afghanistan, Ceylon, India and Burma were traded in the ancient port cities of the Eastern Mediterranean (often by Phoenicians), and from there traveled throughout Europe. 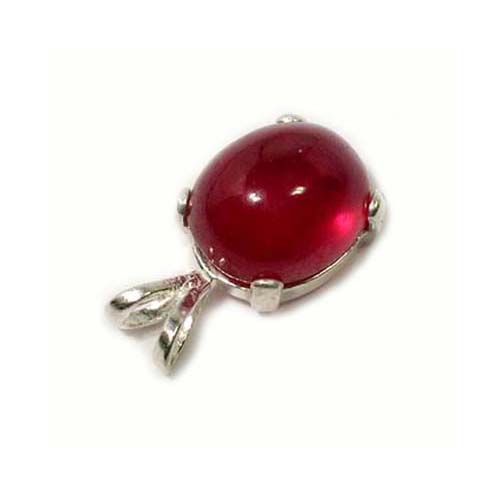 However it is believed that most of the ancient world’s ruby came from Ceylon, where evidence suggests ruby may have been mined for the past 20,000 years. Archaeologists have uncovered ancient Etruscan jewelry with Celanese ruby which dates back to the seventh century B.C. However scientists believe that ruby has also been mined in Burma since Paleolithic and Neolithic times as well, as tools have been excavated by archaeologists dating both to the Bronze Age as well as backwards into the Stone Age. In ancient literature, the ruby was described both by the fourth century B.C. Greek Philosopher/Scientist Theophratus (student and successor of Plato and Socrates) as well as by Pliny, the first century A.D. Roman historian and naturalist. In ancient Rome the ruby was associated with the principles of justice and its administrators (the judicial system). 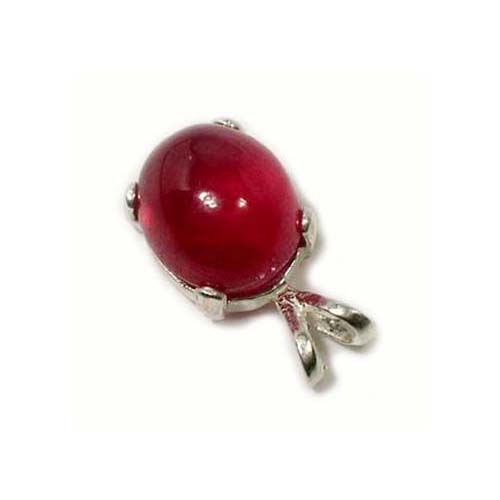 Ancient literature from China indicates that ruby was traded along the northern silk route, moving westward into Europe. The Bible as well makes numerous mentions of ruby, first as one of the twelve precious stones created by God when he created mankind. Ruby is then described as “the lord of gems” when one was given to Aaron on the command of God. And ruby adorned Aaron's breastplate and was symbol of Judah. The Bible also frequently states that the high value of ruby was only exceeded by wisdom and by virtuous women, implying that ruby indeed was exceptionally valuable. The Greeks believed that the "fire" evidenced by a ruby's red coloration could melt wax. Greeks legends speak about huge rubies which were given to Heraclea by the female stork to lighten her room as a token of her kindness. 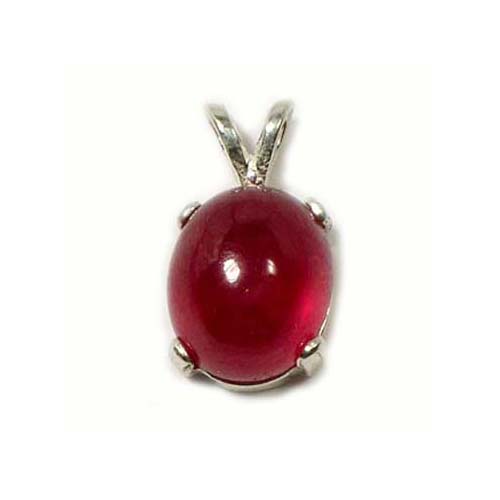 The ancient populations of the Mediterranean also believed that the color of a ruby would change mirroring changes in the health of its owner, and that the color would drain from a ruby at the moment its owner died. In Antiquity and through the Middle Ages it was believed that the cosmos was reflected in gemstones. Ruby was associated with the planet Mars. Ruby was deemed to be the most precious of gemstones not only in the Bible, but also in ancient Sanskrit writings. In Sanskrit, an ancient language of India, ruby was called "ratnaraj", which means "King of Gems". To them, this fiery stone burned with an inextinguishable fire, capable of boiling the water in which it was placed. Ancient Indian legends said that God first created ruby and later created man to possess it, and that he who offered rubies to the gods would be reincarnated as a powerful king or emperor.