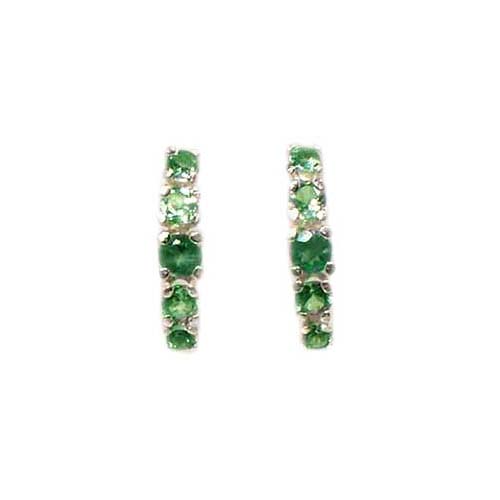 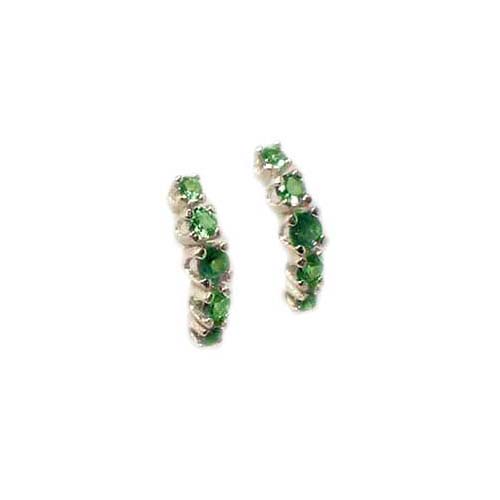 Beware! The vast majority of alexandrite offered in the USA is synthetic. The American Gemological Institute estimates that less than 1 in every 100,000 Americans has ever even seen genuine, natural alexandrite. Here is a ten of eight stunning, brilliant, gorgeous, rare, natural green alexandrite gemstones from the Ural Mountains of Russia. The ten round cut gemstones were hand crafted and faceted by a 19th century Russian artisan, part of an heritage renown for the production of the elaborate gemstones and jewelry of the Czars of Medieval, Renaissance, and Victorian Russia. The faceted cut is a coarse precursor to what eventually became known in the industry as a “brilliant cut” round, the contemporary finish generally given to round diamonds. Though we're not trying to intimate that the gemstones are absolutely flawless, to the eye at least the gemstones are clean and without discernible blemish. 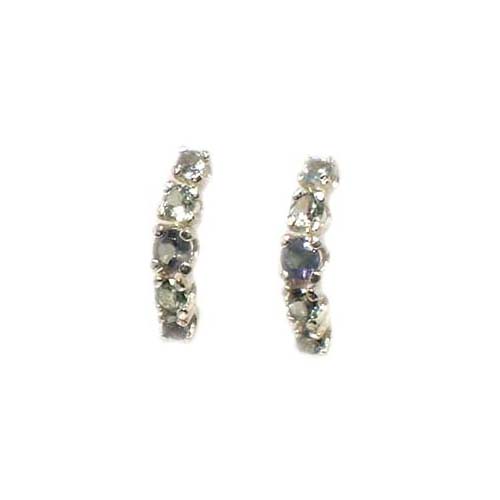 The gemstones, as you can see, are green, at least when they are so inclined. The color under most lighting conditions is the classic alexandrite green, reminiscent of both peridot and emerald. However under strong white light, the stones magically transforms themselves to a rose color with peach undertones. No matter what light source we used to image these gemstones, whether scanner or camera, they turned color. In hand, under most lighting conditions, they are most assuredly green. But the charm of these remarkable gemstones, at least in the higher qualities, is the dramatic color change they are capable of. And true to their reputation, the light of the scanner turned these gemstones rose-peach. And a decent digital camera shows them as blue-violet. The stones are capable of all of those colors, true chameleons, quite extraordinary precious gemstones. 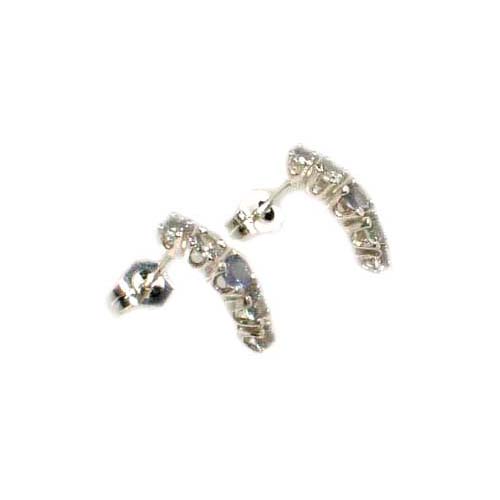 The green images shown here were produced using a filter so as to suppress the color changing characteristics of the gemstones and produce an image of matching color (to show you the normal color of the gemstones). But the remaining rose-peach and blue-violet images give more detail and show you what they look like “fully illuminated”. They are gorgeous gemstones, full of fire and sparkle, gorgeous, vibrant, possessing exceptional clarity and color. They are truly special little gemstones, quite rare. The earring settings are of contemporary origin. They are high quality settings manufactured by one of the USA’s leading semi-custom mount producers. They are constructed of sterling silver; they are not cheap, silver electroplated earrings. It is genuine sterling silver, designed to last a lifetime. It's a first-class piece of jewelry throughout. We can reset in 14kt solid gold upon request. 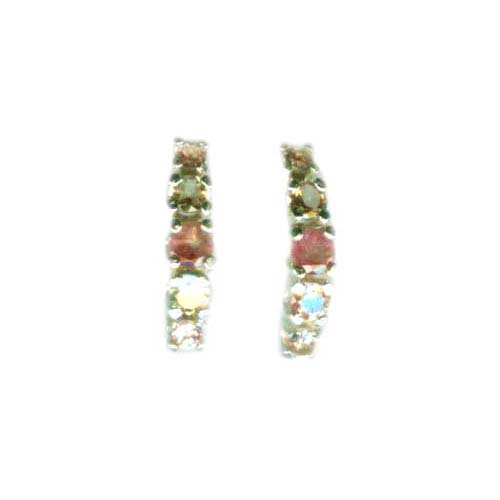 For those who do not know, alexandrite was only produced for about fifteen years during Czarist (Imperial Russia), in the nineteenth century, before the only known mine of any significance played out. For over a hundred years the sole source of alexandrite was "recycled" Russian jewelry. Russian alexandrite is still considered to be the world's best, though very small deposits of inferior alexandrite have been found outside of the Urals in Russia in recent years. Given the rarity of the gemstone, and the enormous demand, reasonably good specimens are hard to find. Flawless specimens of any significant size have almost resulted in duels between buyers vying for the privilege of being a selected purchaser.

As might be expected under magnification the gemstones show the unmistakable, hallmark characteristics of having been hand crafted. The coarseness of the 19th century finish is considered appealing to most gemstone aficionados, and is not considered a detriment, or detract from the value of such gemstones. These characteristics are not only expected of hand-finished gemstones, many believe that such antique hand-crafted gemstones possess much greater character and appeal than today's mass-produced, laser-cut gemstones. Unlike today’s computer controlled machine produced gemstones that approach flawlessness in a perfect finish, the cut and finish of handcrafted gemstones like these is the legacy of an artisan who lived two centuries ago. 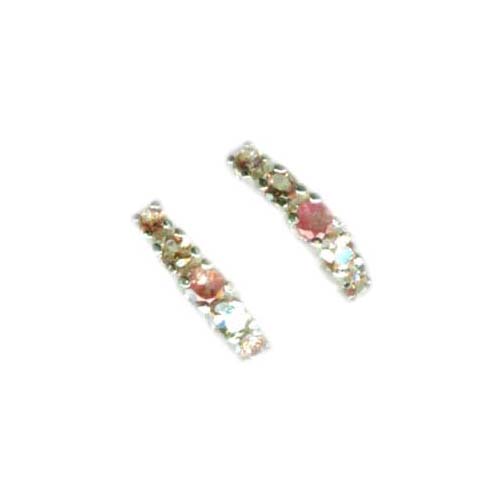 Handcrafted though they may be these gemstones have great luster and sparkle, and to the eye are completely transparent, but one cannot say with absolute certainty that they are absolutely flawless. True, the blemishes they possess are not visible to the naked eye, and the gemstones can be characterized, to use trade jargon, as "eye clean". To the eye they are indeed flawless; however magnified many times over as they are in the accompanying photo enlargements you might be able to pick out one or two slight blemishes within the gemstones, barely perceptible even at such high magnification. Of course much the same may said about almost any natural gemstone. An absolutely flawless gemstone simply is not the rule in nature. Most absolutely flawless gemstones will upon close examination be revealed to be synthetic.

You might also notice under magnification occasional irregularities in the cut and finish. Naturally these characteristics are not only expected of hand-finished gemstones, you must also consider that two centuries ago the mining techniques even theoretically possible, let alone commonly practiced, did not allow the ultra deep mining operations which are so commonplace today. Keep in mind that two centuries ago mankind was more or less limited to surface deposits or near surface deposits of gemstones. Higher quality gemstones which today are routinely mined from beneath hundreds of meters, even kilometers beneath the earth's surface, were simply inaccessible then. 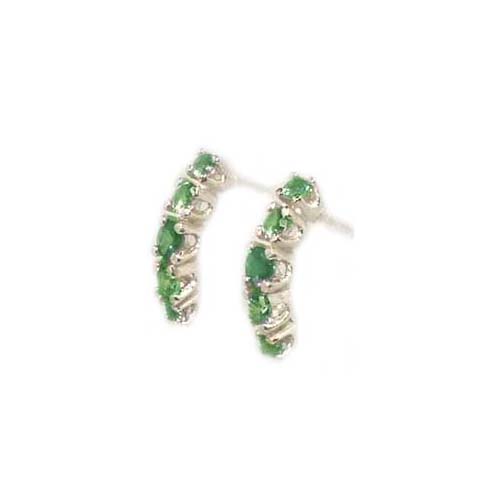 It is precisely for these reasons antique gemstones must be appreciated as antiques first, gemstones second. The relatively superlative quality of contemporary gemstones routinely mined from deep beneath the earth's surface today were simply not accessible two centuries ago, or at least, only rarely so. However for most, the unique nature and character of these antique gemstones more than makes up for the blemishes found within the gemstones, as well as the cutting irregularities common to handcrafted gemstones, all of which are by and large (if at all) are only visible under magnification.

ALEXANDRITE HISTORY: Alexandrite is known as a "color change" gemstone. It is emerald green in daylight or under fluorescent lighting, and a purplish red or blue under incandescent lighting, candlelight, or twilight. It belongs to the chrysoberyl family of gems, and one of the most extraordinary types is a cats-eye variety of alexandrite, possessing a remarkably prominent "cat's eye". Most sources credit the discovery of this very unique gemstone to the year 1830 on the birthday of Prince (and ultimately Czar) Alexander II in the Ural Mountains of Russia, near the city of Ekaterinburg. In celebration of Prince Alexander's coming-of-age, this remarkable gemstone was named after him. Alexandrite was popular in Imperial Russia both with the royal family and the wealthy elite, both because of its association with the Czar, and because red and green were the colors of the Russian Empire (and its flag). 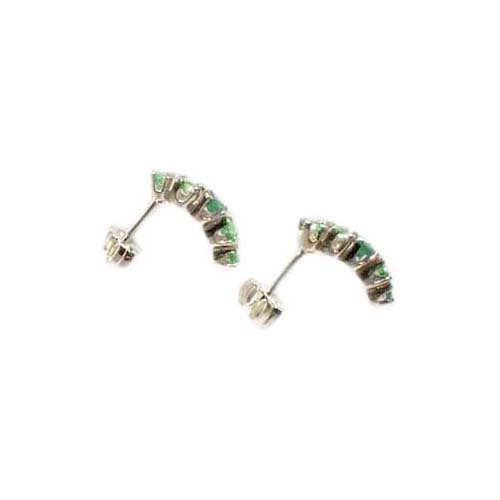 However this most rare stone did not bring to Alexander the good fortune it is now generally associated with. Upon ascending to the throne of Russia, Alexander II began long-awaited reforms, including abolishing serfdom, a deed that earned him the name of “The Liberator”. But a terrorist’s bomb ended his life. In memoriam of the monarch who passed away so prematurely, many people in Russia started to wear alexandrite jewelry. It was considered to be the symbol of loyalty to the throne and compassion towards the victims of the revolutionary terror, but at the same time, it said a lot about the owner’s fortune and social position. Even in those times, it was quite difficult to buy an alexandrite ring. According to Leskov, “there were people who made quite an effort to find an alexandrite, and more often, they failed than succeeded.”

Alexandrite is well known to be an extremely scarce and very costly gem. The quality of color change with different illumination is the primary basis for its quality and price. According to the Gemstone Institute of America (“GIA”), no more than one person out of 100,000 has ever seen a natural alexandrite gemstone, although synthetic alexandrite is common and widely available. It is likely that if you read the fine print of 99% of the Alexandrite offered at retail jewelers, you will find it to be "laboratory produced" - synthetic. If there is a huge color change from a very intense green to a very intense red/purple, you can be 99.9% sure that both the color change and the gemstone itself is synthetic. The shift in color of natural gemstones is generally much more subtle. Kind of like the difference in taste between fruit juice and Kool-Aide. One is subtle and natural, the other brassy and synthetic. 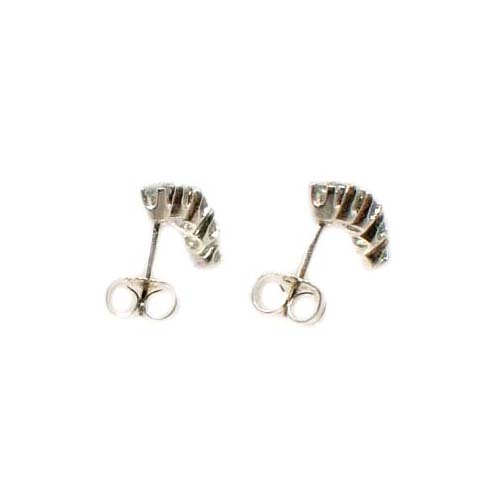 However even as an artificially grown stone, alexandrite often commands a retail price of $300.00 to $500.00 per carat. Of course, alexandrite can be found in Russian jewelry of the imperial era, as it was well loved by the Russian master jewelers. Master gemologist George Kunz of Tiffany was a fan of alexandrite, and the company produced many rings featuring fine alexandrite in the late nineteenth and early twentieth century, including some set in platinum from the twenties. Some Victorian jewelry from England featured sets of small alexandrite. However the original source in Russia's Ural Mountains has long since closed after producing for only a few decades, and only a few stones can be found on the Russian market today.

In the past few decades some very small deposits of alexandrite have been discovered in Brazil, Sri Lanka, Zimbabwe, Tanzania, India, and Mozambique. However the Brazilian gemstones tend to have washed out colors when cut, and the African and Celanese sources produce very dark, not brightly colored gemstones. The alexandrite from India tends to be very low quality, with limited color change. The cut alexandrite originating from Russia is usually "harvested" from vintage jewelry. For over a century this source of "recycled" gemstones from Russia was the only source of Alexandrite, and for many years, alexandrite was almost impossible to find because there was so little available. Russian Alexandrite remains elusive. A few specimens are still found from time-to-time in the Ural Mountains of Russia, and are sometimes available as an unset stone, but it is extremely rare in fine qualities. 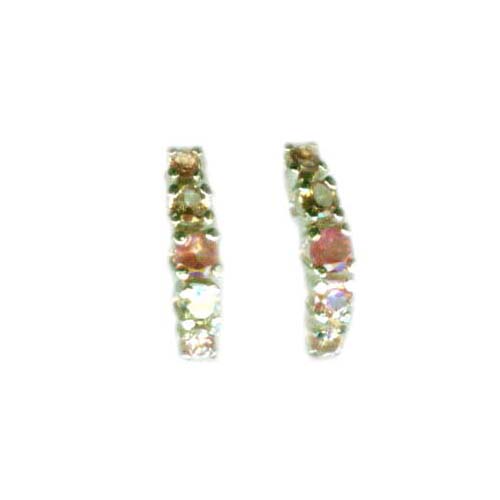 Stones over 5 carats are almost unknown, though the Smithsonian in Washington D.C., owns a 66 carat specimen, which is believed to be the largest cut alexandrite in existence. The colors within alexandrite are due to trace amounts of the mineral impurities iron, titanium, and chromium (and rarely vanadium is also present). As is the case with emerald, the chromium element both giveth and taketh away. While chromium is responsible both for the green color as well as the color change characteristics of alexandrite, chromium also causes alexandrite (like emerald and ruby) to be characterized by fissures and fractures within the gemstone. Just as emerald is treated under high pressure with oil, in recent years newly-mined alexandrite has oftentimes similarly treated under high pressure with a fluxing agent such as resin, wax, or borax.

The tiny crevasses and fractures are then filled with this material under high pressure, and the treatment is generally very difficult to detect outside of the laboratory. However whereas emerald (and ruby) are routinely treated, alexandrite is only occasionally (and only recently) afforded such treatment. The treatment is a recent development, and was not used on gemstones produced in the nineteenth century. In Russia alexandrite is thought to bring luck, good fortune and love, and also to allow the wearer to foresee danger. It is also believed to encourage romance, and to strengthen intuition, creativity, and imagination. Alexandrite is also believed to be beneficial in the treatment of leukemia. On the metaphysical plane, alexandrite is believed useful in reinforcing one's self esteem and balancing positive and negative energy.